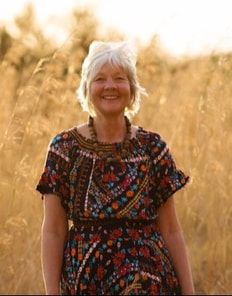 “ The essence of my work is to find a ‘place’ where we can meet with love. From this place change can happen. Curiosity and respect are the two most powerful tools I have…”

Margarete Koenning, born in Colombia and raised in Germany, lives and works in Maleny, Queensland, Australia. She developed a passion for social work at a young age and trained as a social worker in Germany, where she was running a centre for disadvantaged children and youth for seven years.
In 1986, Margarete completed a five-year Gestalt Training at the GENI Institute in Frankfurt, Germany, where she studied under Laura Perls amongst others. Her first job as a psychotherapist was in a German hospital where she work in the area of substance abuse and addictions. Following this, Margarete was employed by the German government to provide therapeutic care in a family counselling centre.
Fulfilling a growing dream for a sustainable and community-driven lifestyle, Margarete relocated to Australia in 1992 where she soon established her own private practice in the heart of Maleny, Queensland and began teaching counselling skills at the Nambour TAFE College. Over the next eight years following her migration, Margarete worked as a faculty member for the Brisbane Gestalt Institute as well as for other Gestalt Institutes in Lismore, Terrigal and Sydney. Margarete also supervises Lifeline counsellors and continues to provide counselling services to indigenous clients through for North Coast Aboriginal Corporation for Community Health (NCACCH).
The core principle of her approach is to meet each individual with love and gentleness. Margarete believes that through love, change can happen.

Margarete’s passion is the modality of Family Constellation work for which she received training in Germany in the late 1990's. She frequently runs Family & Systemic Constellation Workshops in Maleny and other areas of Australia and Europe.
Margarete enjoys being actively involved in her community and spending time in her garden, growing food and developing a self-sufficient home environment.
Her garden is the place where she finds peace and strength.